The best and easiest HTML-to-PDF API 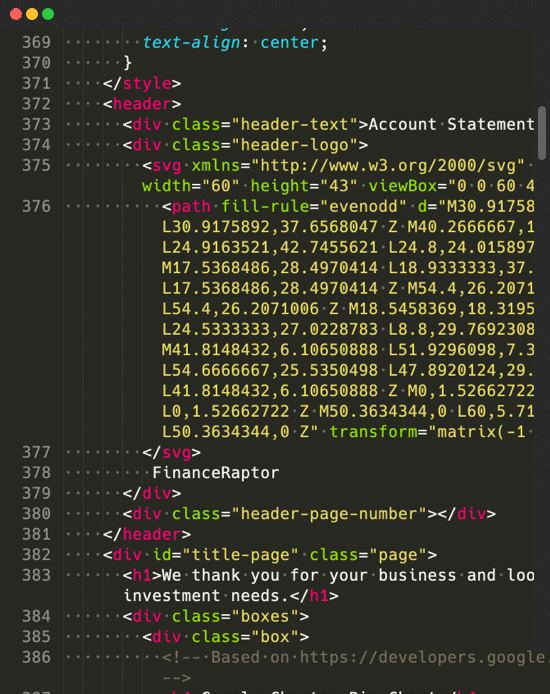 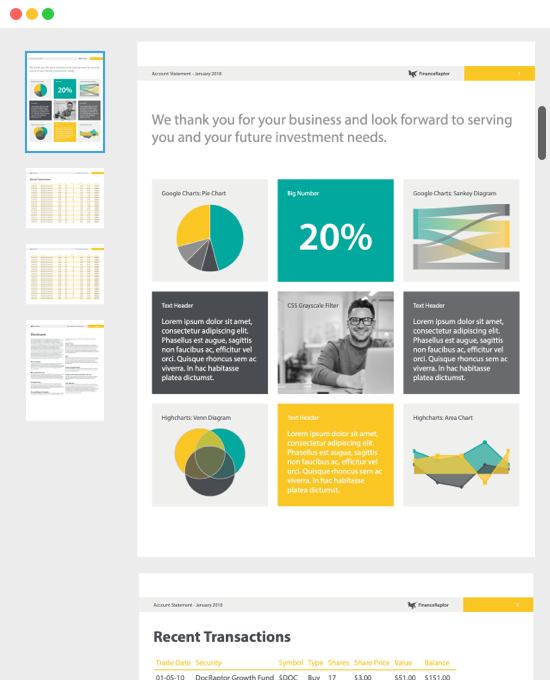 From small businesses to the Fortune 100, you can rely on us DocRaptor

From small businesses to the Fortune 100, you can rely on DocRaptor

Uptime Guaranteed
We back our API with a 99.999% uptime guarantee. If you need reliability, DocRaptor is the service you can trust.

Any Size Document
We have no limits on document input or output size (and all documents cost the same, regardless of their size).

Infinite Throughput
Need thousands of documents per day? Our infrastructure can handle any throughput requirements.

DocRaptor is used by organizations big and small

Full Control of Data Retention
Documents can be deleted immediately upon generation or stored longer so our support team can assist you with debugging and styling implementation. You have control.

Encrypted In-Transit and At-Rest
PDF document input and output are encrypted with AES encryption when not in use by the conversion processes. We care deeply about maintaining the privacy of your information.

SOC2, HIPAA, and GDPR Compliant
With a strong record of standard compliance, DocRaptor's HTML-to-PDF API can be used regardless of your geographic location or industry, even for electronic protected health information. See our Security, Privacy & Compliance page for details.

Free and Easy to Integrate

Unlimited Free Test Documents
Every account includes unlimited watermarked test documents. Take your time testing your document content and styling without worrying about extra charges. You can also get help from DocRaptor professionals at any time.
See Pricing

Debugging Help
Making the perfect document can be tricky. Our support team is happy to help debug your style or implementation problems and our documentation is the best in the industry.
Contact Support

DocRaptor is the best PDF generator for almost every use case

There are several popular free PDF conversion libraries including wkhtmltopdf, PhantomJS, and Chrome Headless / Puppeteer. These tools use the Webkit or Chromium rendering engines, which are designed to display continuously scrolling webpages. In contrast, DocRaptor was built for generating multi-page documents.

This fundamental difference has a tremendous impact on PDF functionality such as page breaks, headers and footers, and variable page sizes. Our conversion engine provides layout and styling options (including CSS Paged Media support) that the open-source PDF engines simply cannot match.

Additionally, as a cloud-based API, we provide professional support, instant scalability, and guaranteed reliability without the costs of long-term maintenance for these libraries and their infrastructure.

As an alternative to self-hosting these commercial libraries, DocRaptor offers a much lower price point and provides immediate scalability and reliability. Generating any significant volume of documents typically requires multiple servers, queue management, and other infrastructure—DocRaptor handles all this maintenance and overhead so you don’t have to.

There are also many inexpensive HTML to PDF API services that, at a glance, look very similar to DocRaptor, but they all use open-source, browser-based libraries. As a result, they also suffer from those library’s layout issues and limited functionality. As an official partner of Prince, DocRaptor provides only the highest-quality PDF generation.